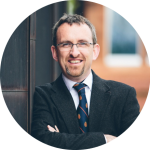 John Turner is a Professor of Finance and Financial History at Queen’s University Belfast. He is the former Dean of Queen’s Management School, serving in that capacity from 2014 until 2017. He is also the founder and director of the Queen’s University Centre for Economic History. Turner’s research is focussed on the long-run evolution and development of banking, banking crises, bubbles, corporate law, and financial markets. He has recently published an award-winning book with Cambridge University Press entitled Banking in Crisis: The Rise and Fall of British Banking Stability. His research has been funded by the British Academy, Economic and Social Research Council, and the Leverhulme Trust. He has held several distinguished visiting positions during his career – he has been a Houblon-Norman Fellow at the Bank of England and an Alfred D. Chandler Fellow at Harvard Business School.